Family physicians, nurse practitioners and doctors whose health care focuses on non-narcotic therapies are some of the nation’s most prolific opioid prescription writers in recent years. Federal guidelines say they shouldn’t be. 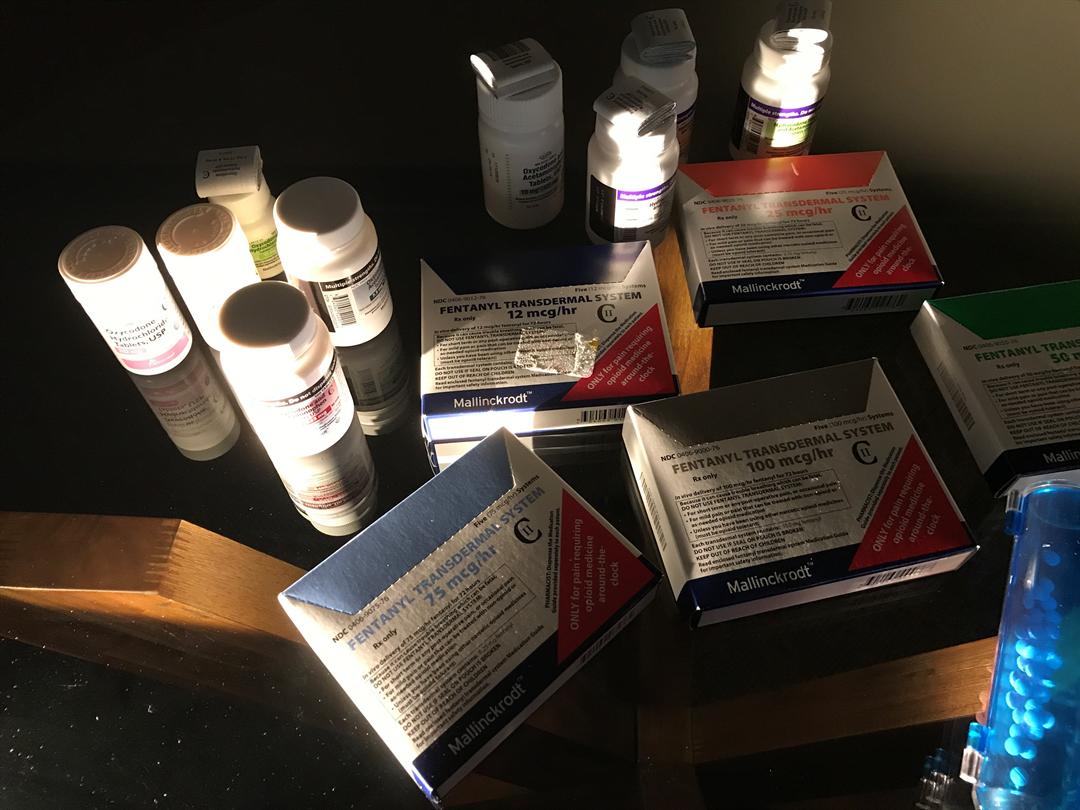 Every year, prescription opioids are blamed in the overdose deaths of thousands of American. Between 2013 and 2016, some 71,000 people have died from lethal doses of these powerful painkillers that originated with a legal prescription, according to Centers for Disease Control and Prevention data (Photo credit: Andy Miller, Raycom Media)

Family physicians, nurse practitioners and doctors whose health care focuses on non-narcotic therapies are some of the nation’s most prolific opioid prescription writers in recent years.

Federal guidelines say they shouldn’t be.

Medical professionals not specializing in oncology, surgery, emergency medicine or pain, accounted for more than half of the 1,000 highest opioid prescribers in the Medicare Part D, a government-sponsored drug benefit for the elderly and disabled, over a three-year span beginning in 2013, a Raycom Media national investigation has revealed.

Pain doctors, whose use of opioids has come under increasing scrutiny by medical experts doubting the drugs’ effectiveness in curbing pain, represented nearly a third of the nation’s highest prescribers. They include three doctors at an Alabama clinic who wrote 33,084 opioid prescriptions during a three-year period. Compare that to 40,124 prescriptions written by 900 doctors at the Mayo Clinic in Rochester, Minnesota did during the same time.

What’s more, just 10 percent of the top providers have been disciplined by state medical boards for prescribing-related issues. And even after sanctions, the majority has been allowed to continue practicing.

These examples are “a red flag for inappropriate and dangerous medical treatment,” said Andrew Kolodny, co-director of the Opioid Policy Research Collaborative at Brandeis University. 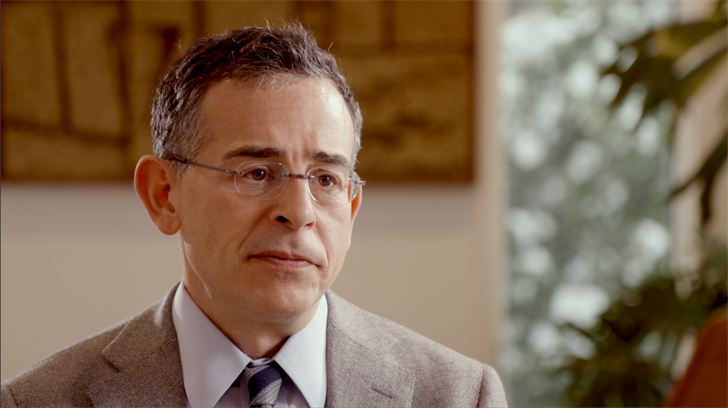 Federal officials, for years have been sounding the alarms about the excessive use of opioids. In 2016, the Centers for Disease Control and Prevention recommended opioids should be used to mitigate pain from cancer, at the end of life, after a surgery or serious accident, and, in some cases, for severe chronic pain.

Yet the top prescribers included no oncologists, and only four emergency medicine doctors and 15 surgeons.

Raycom Media analyzed the publicly-available Medicare data for the top 1,000 opioid prescribers, breaking down their medical specialties, the number of prescriptions they wrote and their prescribing rates compared to non-opioid drugs.

The analysis was important because Medicare pays for at least one in four drug prescriptions nationally.

The data included nurse practitioners and physician assistants – medical care providers who can write prescriptions for the same controlled substances as the doctors they work for, raising concern among government regulators and law enforcement officials.

Last year, the inspector general for the U.S. Department of Health and Human Services analyzed 2016 Medicare data that identified questionable patterns of 401 prescribers – and a third of them were nurse practitioners and physician assistants.

None was higher than Darius McGee, a nurse practitioner at the Laurel Pain Clinic in Laurel, MS. He was the sixth highest prescriber in the Medicare program in the U.S.

Darius McGee, a nurse practitioner, works at this clinic in Laurel, MS. During a three-year span beginning in 2013, McGee prescribed more opioids to Medicare patients than any other nurse practitioner in the U.S. (Photo credit: Andy Miller, Raycom Media)

That surprised John Dowdy, director of the Mississippi Bureau of Narcotics and a former assistant U. S. attorney.

“It would be uncommon for a nurse practitioner to write more prescriptions than the doctor running the clinic,” said Dowdy.  “That would certainly raise red flags.”

Any medical professional who is not a pain specialist and writes a lot of opioid prescriptions should cause concern, he said.

“If it’s a family practitioner or a general practitioner, and they’re showing up on a list as a high-volume prescriber, we probably have a problem with that doctor,” Dowdy said. 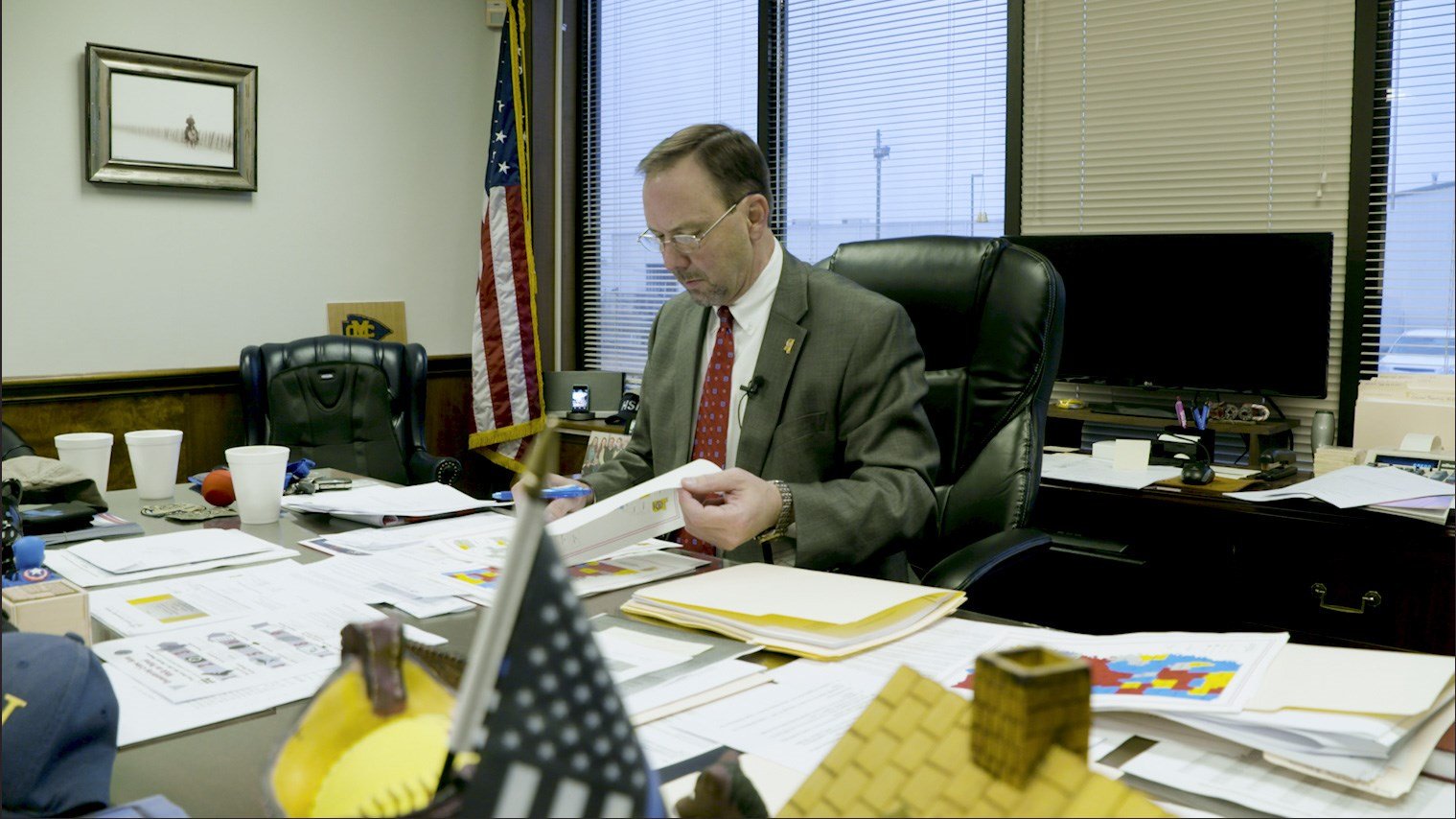 John Dowdy, director of the Mississippi Bureau of Narcotics, said that opioid epidemic does not discriminate. It is affecting the young and old, rich and poor, black and white. It even has touched Dowdy. He lost a relative to an opioid overdose last year. (Photo credit: Andy Miller, Raycom Media)

Among the top prescribers are 199 general practitioners including Dr. John Richard, a family medicine physician in Lexington, KY.

At No. 40, he is the highest ranked family-practice doctor on the list.

In 2013, the Kentucky medical board filed a complaint against him for prescribing excessive amounts and combinations of addictive drugs. The case settled when Richard agreed to pay a $7,500 fine and, among other things, maintain a drug log.

Between 2013 and 2015, Richard wrote 28,099 opioid prescriptions for his 3,318 patients. Each year, his volume of prescriptions increased noticeably even though the number of patients he treated with opioid drugs only rose slightly.

Sanders’ case load during that time nearly doubled. The others had only modest increases in the number of Medicare patients they treated over those years and they still hold active medical licenses. Each declined comment.

There are also two doctors on the Medicare list who didn’t write a single opioid prescription in 2013 only to write thousands of prescriptions in each of the following two years. 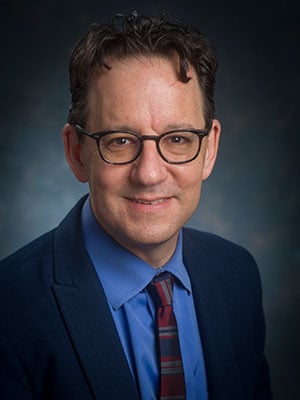 Dr. Stefan Kertesz, professor and addiction-opioid safety specialist at the University of Alabama’s Medical School in Birmingham, cautions there may be a logical reason for the doctors writing more opioid prescriptions: They may be taking on more chronic-pain patients as other doctors leave the opioid-prescribing business.

“Physicians have gotten the message loud and clear: Be very afraid,” said Kertesz (left). “Whoever’s willing to see these vulnerable patients is the next target for law enforcement.”

Dr. Patrick Waring was surprised to see so many of his interventional pain management colleagues among the top prescribers. Nearly a fifth of all top prescribers listed that as their specialty.

The nature of the medicine they practice is to treat pain patients without prescribing opioids, said Waring, who practices in Metairie, LA.

“Opioids should not be the first, second or third options for the treatment of chronic pain,” he said. “It should be a last resort.” 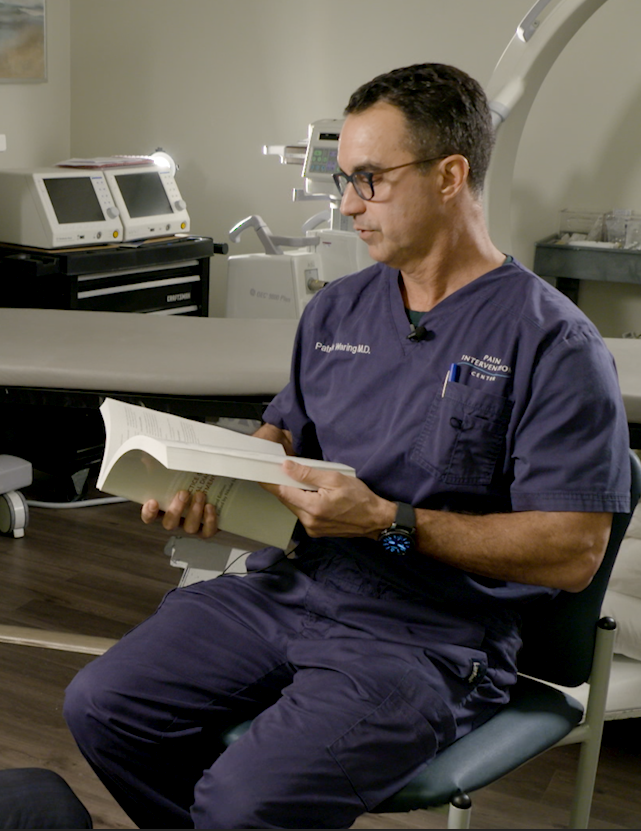 Dr. Patrick Waring holds up what he considers the bible of his medical specialty, interventional pain management. The use of opioids to treat patients is not listed anywhere in the manual, the Metairie, LA doctor said. (Photo credit: Andy Miller, Raycom Media)

Some studies show the path to addiction for at least half of all heroin users started with a valid prescription for a painkiller.

In 2015, for example, 130 general practice health care providers including nurse practitioners and physician assistants wrote more prescriptions for opioids than all other drugs combined. The same was true for more than two-thirds of the top listed Medicare providers, data shows.

Kolodny, the opioid-addiction expert at Brandeis University, said these examples underscore the need for vigilant monitoring of prescribing habits.

“We don’t have to wait for doctors to harm people,” he said.

Those “innocent prescribers” were family doctors, nurse practitioners and other health-care professionals who serve as the front door to medical care and who were persuaded opioids were good for treating pain and related ailments.

“It was assumed the person who overdosed was abusing and doctor shopping,” Harshbarger said. “We assumed good-faith prescribing. Now we realize we were wrong.”

Students with disabilities are receiving unequal education in remote learning